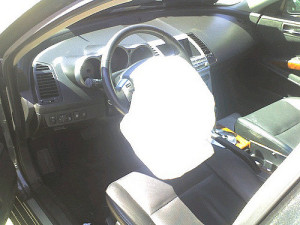 The automotive industry has been buzzing lately surrounding the massive airbag crisis caused by Takata, the worlds largest airbag and seat belt supplier. The airbags installed in cars from 2002-2015 have been reported to deploy explosively, injuring hundreds and causing 10 casualties in the U.S.

According to a Consumer Reports article, Fiat Chrysler, Mitsubishi, Toyota, and Volkswagen confirm in a report from Florida Senator Bill Nelson that they are selling some new vehicles with airbags that contain Takata’s ammonium nitrate-based propellant in driver and passenger frontal airbag inflators without a chemical drying agent, also known as a desiccant. These vehicles will have to be recalled by 2018.

The estimated number of recalls needed by 2019 is over 75 million vehicles ranging from 14 different automotive manufacturers. These enormous number of recalls is not only harmful to consumers, it also hurts the entire automotive industry. However, with increased scrutiny being focused on the quality and safety of the airbags, they should become safer in the future so these recalls do not continue to occur.

On April 7, 2016 a 17 year old girl in Texas was killed when shrapnel from an exploding Takata airbag impaled her neck. The fatality marked the 10th life lost due to the malfunctioning airbags. To date, over 8 million airbags have been replaced, but there are still millions more that need to be addressed. The process of replacing all of the airbags that need recalls could take many years, and new cases of faulty airbags continue to be reported frequently. This crisis could open the market for new manufacturers to dethrone Takata as the top dog in the airbag field moving forward. It will be very interesting to see how Takata handles this scenario, their stock prices have plummeted since the reports came out. This story is one that will continue to be in the news as more information comes out. 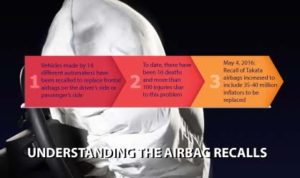