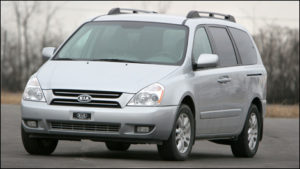 Automobile manufacturer Kia, is recalling nearly 100,000 of the company’s Sedona minivans with model years spanning from 2006 to 2012. The recall is in place due to some suspension parts that are susceptible to rust damage when they come into contact with salt used on icy roads in the winter.

According to a Chron article, the same recall problem was addressed in 2013.  2006 and 2007 model year vehicles will have their suspension parts replaced by the company, while the remaining vehicles will receive an anti-rust coating on the parts to protect them from any further damage.

Kia will reportedly inform consumers of their recall on July 25th.