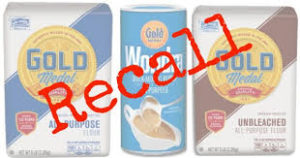 General Mills, one of the nation’s most popular food companies, has been targeted in a recent flour recall. According to International Business Times, over 40 people have gotten sick spanning across 21 states prompting the recall of roughly 45 million pounds of raw flour. The cause of the widespread sickness was linked to bacteria commonly found in animal feces that had contaminated the flour products.

According to Fox News, FDA testing determined that raw dough eaten or handled by people who became ill was made using flour was produced between November 2015 and February 2016 at the General Mills facility in Kansas City, Missouri.

FDA officials tell consumers to dispose of any flour products included in the recall, as well as make sure to wash hands, work surfaces, and any utensils that have been in contact with raw dough products containing flour.

In an article by the NY Post, New York Senator Charles Schumer, said it takes too long for dangerous food to be taken off shelves, and demanded that the FDA rework its recall guidelines.

Schumer was very upset at the fact that the 21-state ­E. coli outbreak linked to tainted flour began in December — but the recall wasn’t issued until May.